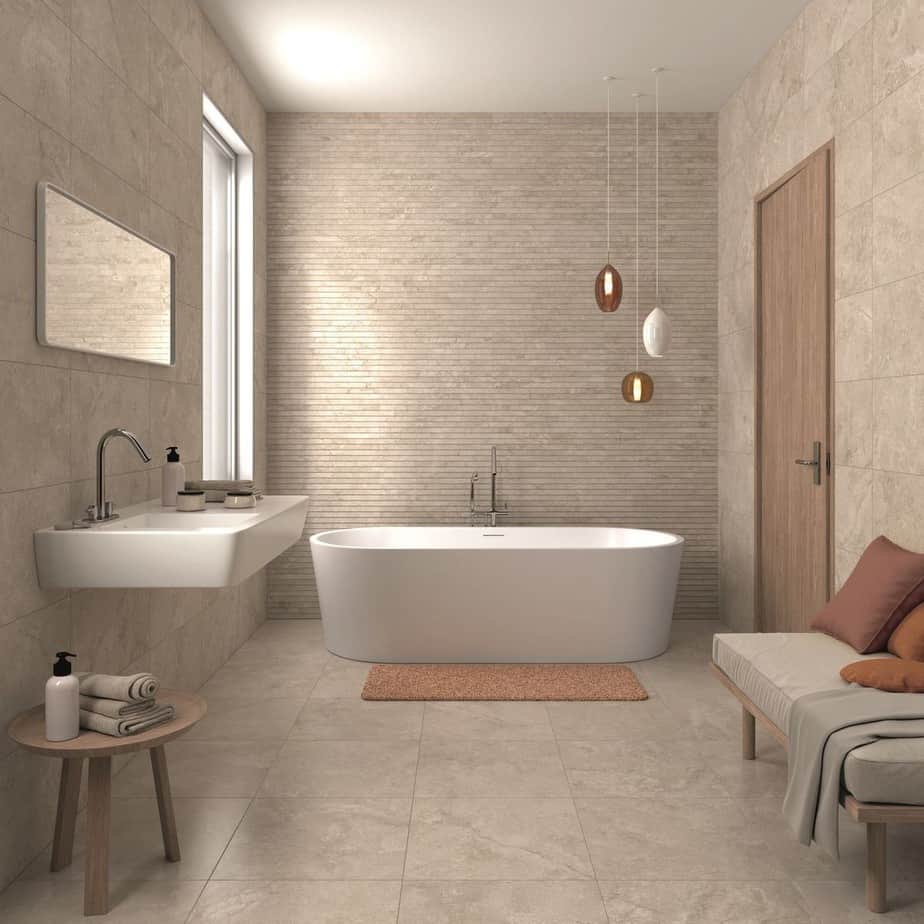 MENS BATHROOM IDEAS – Men love simplicity and neutrality. The general statement applies to mens bathroom. That derives from men’s natural traits who want to keep the bathroom functional and effective.

While that feels super fine, some men may wish for something different. They don’t want to realize a bathroom that looks too plain and boring. To help you, we thereby pick 10 mens bathroom models that may meet your need.

We choose grey as the first recommendation. Grey is among the top neutral colour that has some shades. The bathroom combines the bright and bold shades of the colour. Moreover, the bathroom picks different grey materials.

As a result, the bathroom doesn’t look boring at all. The grey marble makes the bathroom feeling fresh. Whilst the grey-painted wall gives a strong statement for the bathroom.

We are impressed by the bathroom’s furnishing style and the window model. They modify a vintage design that gets mixture from modern design.

The bathroom brings together black, white, grey and brown. To begin with, the bathroom looks fresh with the large window that allows you enjoying the trees outside.

That must bring a calming sense for the stressful mind. To modify the colours tones, the bathroom selects some materials. The black hue, for instance, appears from the wooden vanity that takes up the sink basin.

Pairing black and white can’t ever tire us out. The bathroom invites us to play with geometrics. That can be seen from the hexagonal ceramics for the bathroom’s flooring. The bathroom modifies the walling with the rectangular tiles.

The white-painted concrete is above the rectangular ceramics. Basically, the bathroom mixes and matches black and white items. But the simple idea can turn the bathroom into this fancy.

Given the narrow space, the bathroom selects the floating sink basin and the towel hanger on the wall.

This one shares the same concept with the previous one. The bathroom also pairs black and white but this time around, the style seems more creative. We recommend the example for those of who you love patterned motif.

That’s can be seen from the bathroom’s floor that uses the beautiful ceramics. Not only graceful but also the tiles produce a bit of vintage feel. The door partition becomes a cool tip to create a wide feel of the bathroom.

As for decorations, the bathroom hangs the black-and-white picture and the plants. Looking stylish but remain relieving.

Sophisticated and manly. This one practices industrial bathroom style. By definition, the bathroom design prioritizes neutral colour and minimalist furniture. That makes the bathroom model fits for mens.

The bathroom goes further in terms of designing. The bathroom places the pipeline that appears for naked eyes. The element really represents the bathroom style. The floating sink area looks simple but wealthy as you can use it for various purposes.

The bathroom sets up some glass and metallic items to create a wider feel for the bathroom. The wooden flooring warms the area.

It’s time to blend black and brown. The two colours in contrast one to the other. Stemming from the broad concept, the bathroom takes the soft shades of the colours. That makes the bathroom feeling soft.

The pendant lighting also looks graceful and creative. Putting the live plants refreshes the bathroom that corresponds with the trees outside the windowpane.

Loosen your tightened mind after hardworking hours in this bathroom. Despite the dark atmosphere, the bathroom feels very quiet. This really helps to put your mind down. The serene ambience comes from the dim rays.

The bathroom selects natural material, such as the floating, wooden vanity and the wooden door. We especially love the bathroom tub that looks adorable. Light the candles as you close the eyes.

Bright shade of blue is likened by men and women. Many love the colour shade as it brightens their bathrooms. The example especially chooses the blue shade that best describes the oceanic colour.

As the sweeteners, the bathroom places the bluish ceramics on top of the table and the cute pendant lamps.

Glowing in the dark. That’s our statement about the bathroom. Black becomes the leading colour of the bathroom as you can see from the walling and the door, among others.

The grey hue appears from the fabrics in the chair. Interestingly, the bathroom creates the “hidden storage” above the sink basin. When the light is on, the storage shines. That what leads labelling the example as the glowing in the dark mode.

The bathroom looks masculine because of the colour choice. At the same time, the bathroom feels stylish with pendant lighting.

Clean and chill. The bathroom offers you not only as of the bathing place but also as the relaxing spot. The bathroom combines the soft shades of grey and brown. The result is a soothing bathroom.

The bathroom chooses the mid-century furnishing that seems chic and simple. The bathroom tub and the sink area look simple. The interesting item lies on the sofa. The sofa contains the throw pillows and the fabrics to allow you simply stretching the legs.

Like the previous examples, the bathroom picks the pendant lighting that looks trendy and modern.

We hope our 10 mens bathroom ideas prove that the bathroom design is far from feeling too plain or boring. What do you think guys?