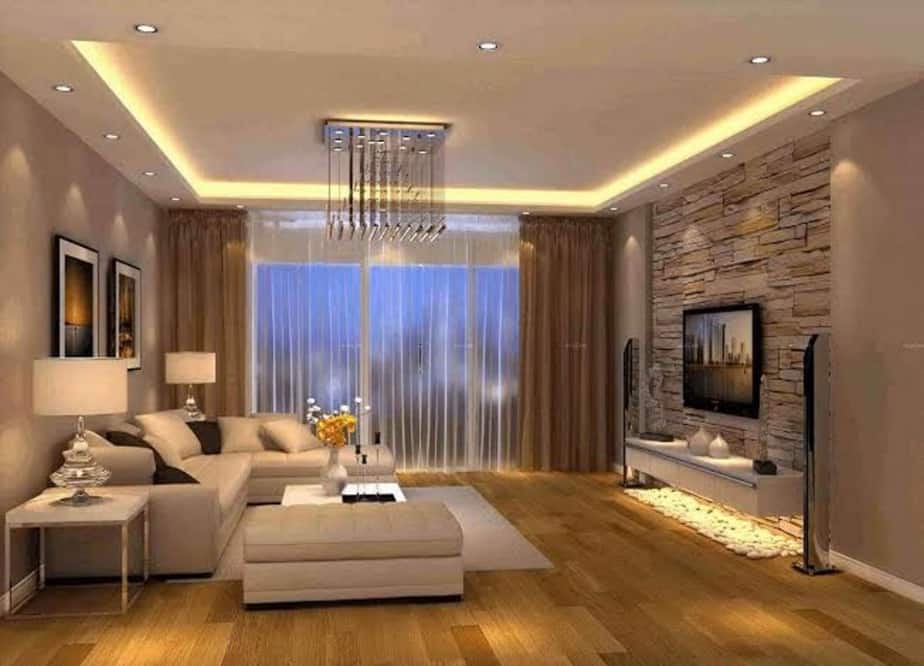 Don’t you know that the ceilings of your living room or kitchen open for focal points? Besides the wall and floor, the ceiling has become a growing element within one’s house to experiment with.

Whether or not you’re really into interior design, you need to consider the tray ceiling. The innovation is another alternative to a coffered ceiling that refers to multiple squares in a grid pattern.

The tray ceiling is shortly called a recessed ceiling or inverted ceiling. The aspect can perform functional and decorative tasks.

You can read until the end for complete information you need, or jump to the ideas if it’s the only thing you need.

What is a Tray Ceiling?

From this, different personal tastes play their parts. Some house owners prefer to place a fair-sized tray ceiling in the center. Others consider creating a tray ceiling that covers almost all of the ceiling area.

Producing a tasteful tray ceiling doesn’t stick to certain criteria. You need to take into account compatibility between the tray ceiling model with the whole room design. Some are willing to spend extra cost to consult with an interior designer to determine which tray ceiling that can lift the room value.

Yes, sometimes spelling versus writing may confuse us. In regards to trey ceiling or tray ceiling discussion, Merriam-Webster dictionary only recognizes the tray ceiling. The English dictionary says that a tray ceiling is a ceiling that is put under a gabled roof at a height part way up toward the ridge.

As you browse on the internet, you’ll find some websites that use trey ceiling. The term refers to the same tray ceiling. But let’s stick onto the dictionary that chooses tray ceiling instead.

How to Build A Tray Ceiling?

While most of the tray ceiling job requires help from a builder or designer, you can make the desired tray ceiling on your own. In general steps for a simple tray ceiling model, you need to follow the rough steps.

Prepare materials, such as drywall, glue, sandpaper, furring strips, nails, sanding block, utility knife, and joint compound. With the help of your spouse or friend, attach drywall to the whole ceiling. As it is fixated on the ceiling, use joint compound to affirm it.

After that, select the width of the lowered section. Usually, the width ranges from 30 to 61 cm. Pay attention to the ceiling height before deciding the width. Then, create the shape of the lowered area; rectangular, square or others.

We regard a coffered ceiling that leads to an affirmative ceiling appearance. While a tray ceiling gives elegant looks for the element. The tray ceiling can further beautify the ceiling when you implement the creative model.

We recommend you thoroughly know what’s proper for your room or your personal taste. For better results, we recommend you including a coffered or tray ceiling into the room plan. This allows you to create the room that will look stylish in all of the aspects, including the ceiling.

This is different from remodeling the existing ceiling. Like it or not, you need to correspond the ceiling remodeling with the room whole model. You may need to set aside your personal taste for the sake of the whole room compatibility.

For instance, you actually prefer to purple-painted tray ceiling because you wish to make the living room colorful. But in reality, the living room already looks trendy with patterned motif tiles on the floor.

In this regard, we recommend you choosing the coffered that will make the ceiling colorful with furring strips or drywalls. And paint the coffered with neutral colors, of course.

Please bear in your mind that at least you possess basic builder skill. Otherwise, your planned tray ceiling will easily get damaged. Make sure you know how to nail drywalls well at the ceiling, for instance. This may seem too simple but not everyone knows how to fasten the drywall.

Another basic builder skill includes applying a joint compound to cover the gap that may appear between the drywalls and the perimeter of the ceiling. Many people will know how to apply the joint compound but not all of them know well how to make the gap looking smooth as if it were invisible.

If you choose to make your own tray ceiling, of course, this will trim the budget. You don’t have to hire a builder, a contractor, or an interior designer. The tray ceiling cost will mostly be used for purchasing materials, such as drywall, furring strips, joint compound, sanding block, nail, and glue, among others.

Always pay attention to the qualities of the materials. Above all else, you need to prioritize the long durability of the tray ceiling to the style or the cheap cost. For this point, you can ask for which better materials to home improvement store employees or friends with good knowledge about this.

On the other hand, you can hire a builder or contractor to make the tray ceiling. Some house owners don’t mind paying money for an interior designer for choosing the most proper tray ceiling first.

If you choose this method, you won’t have to spend much time exploring the prices and the qualities of the materials. Nor you won’t have to learn basic building skills. Leave the job to the best man. However, you may have to negotiate with the builder or interior designer should you feel their offered rates are too high.

Matching tray ceiling with bedroom concept results in this complete, greyish atmosphere. The picture suggests to choose other tray ceiling material than drywall should you wish for a shiny tone as the example suggests. The tray ceiling houses in-built lamps and a large fan. The tray ceiling gives modern touches for the bedroom.

This is what you’ll get when you invest in tray ceiling. Hiring an interior designer and a builder will help you create this stunning and elite tray ceiling. The tray ceiling utilizes shiplap then arrange them in the cone-like pattern. On top, the tray ceiling chooses a gold cover from which the beautiful chandelier lighting drops.

Boost whole family appetites with orange tray ceiling as the picture suggests. The color closely ties to enthusiasm and positive vibes that hopefully holds true for appetite. The tray ceiling further looks enticing with the lighting rope. The shape of the tray ceiling looks unique. The chandelier lighting beautifies the ceiling.

This dining room takes advantage of the high ceiling. The area creates a graded tray ceiling with furring strips. The concept leads to the elegant tray ceiling despite the fact the area looks rather plain in white. Hanging beautiful pendant lighting seems a must-do in a classic room like this one.

This area goes for a classic tray ceiling shape; rectangular. We observe the tray ceiling selects natural wood planks like those of the first example. But this time around, the wood planks seem more polished. The tray ceiling houses the adorable and traditional pendant lighting with wood and bulbs. So creative!

For a modern space like this one, similar wood planks shape and tone are more recommended. The example, in particular, picks the wood planks that look light and bright, here. The tray ceilings cover the kitchen and the living room. The tray ceiling complies with the furniture and the floor.

Painting your bedroom tray ceiling with a soft shade of blue makes the area calm and relaxing. The bedroom picks the blue shade that adjusts with the bedding color. The soft, deep blue shade applies to the central part of the tray ceiling. While the tray ceiling border gets painted in white.

This tray ceiling brings together two shades of grey with white as the basic color. As the living room selects deep grey shade, the tray ceiling picks it up but in minor proportion. We examine the tray ceiling selects a bigger portion for the light shade of grey. Neutral but creative.

Here’s an alternative for those of you looking for painting a tray ceiling for your classic dining room. If you think a tray ceiling with deep brown for the room is too common, try this color. The tray ceiling gets painted in the brown shade. The choice makes the dining room bright and elegant.

The bedroom pairs white and deep, soft shade of brown to produce warm and peaceful tones. Although the color scheme is similar to the first one, you notice the painting yields a different feel. For this double tray ceiling, the color scheme looks in contrast to one another while remains relaxing.

A tray ceiling lighting can sometimes astonish you simply because of the large size. This one is among the lighting models with significant impacts. The pendant lighting looks minimalist that covers most of the tray ceiling. The pendant works with some in-built lamps for producing rays for the kitchen.

Pick modern and classic tray ceiling lighting for your modern and vintage dining room. As this one suggests, the dining room hangs the classic cover on top of the modern, large bulb. The pendant lighting chooses a golden tone that adjusts with the dining room’s atmosphere. This one looks glowing and tasteful.

You can choose LED lighting to produce this awesome atmosphere alongside the tray ceiling. The tray ceiling rope looks amusing that can add a pleasant feel for your entertainment area. The bluish tone shines brighter when other lighting models are switched off with black furniture and black furring strips.

This oval tray ceiling contains yellowish lighting rope. We call it as yellowish as we look at the dim rays from the lighting. This rope lighting works best with the brown area. The dim rays give bright shade for the area that mostly chooses the deep brown shade. What a simple yet brilliant idea!

This is what happens when you switch on the tray ceiling lighting rope only. The lighting rope produces bright rays like the first example. This one seems dramatic in brightness given the grey crown molding. Unlike the earlier examples, this lighting rope isn’t accompanied by in-built lamps or pendant lighting.

We regard this tray crown molding looks more complex as compared to the previous ones. We call this so as we refer to the various depth gaps in between the crown molding linings. The crown molding fits well for the tray ceiling that looks unique in the polygonal shape.

Our last recommendation provides another option for your modern and classic room. The crown molding seems simpler as compared to the fourth idea. But the simple crown molding still looks elegant and comfortable for all. So, you can choose either of the two last options depending on your personal taste.