INDUSTRIAL KITCHEN IDEAS – Masculine and firm. Those are two tones that emerge in an industrial kitchen. This particular style stems from strong and purposeful attributes we often experience when visiting office, factory or construction.

The industrial kitchen is among unlikely kitchen concept most of the households apply. Thanks to modern interior design that an unpopular kitchen style gets more rooms to show up.

We will talk about amazing things about this style on the list. Make sure you read them all.

The ceiling of the kitchen utilizes the high ceiling design with the wooden beams and the metallic holder to host hanging upper segment above the kitchen island. The large pipe that leads to the kitchen hood is another iconic industrial kitchen aspect.

To keep the kitchen spacious, there is the open shelving that contains many items, from spices to decorative jars.

Whilst the first example utilizes metallic and grey painting, our second example takes a contrary approach. This proves that the industrial kitchen can feel so warm. The key to this sub-style lies on the timber category and soft brown painting.

A tall and large window like this provides a strong industrial feature. The window ensures the kitchen gets proper fresh air and light during the day. The kitchen combines open shelving and closed storage.

To create an industrial kitchen into your modern or minimalist apartment requires the whole apartment or house setup. As seen from this picture, the kitchen joins with other rooms that save space and utilize the kitchen for other room purposes.

To realize this kitchen goal, consider putting wooden beams as the open ceiling for this apartment. Painting the kitchen’s wall with grey adds industrial flavor for the kitchen, as well. The cupboard that is made from strong timber is another clever idea.

Like the second idea practices, don’t forget to surround the kitchen with large windows for healthier ventilation.

Our second example for an industrial kitchen for your modern apartment or house. This time around, the kitchen seems separate from other rooms. Despite so, this kitchen prefers to keeping the area spacious and relieved.

That’s thanks for the windowpane that allows for outside viewing from the inside. The kitchen chooses bold black as the theme color that wraps almost all parts of the kitchen, from the ceiling to the chair.

Given all of the choice, the kitchen looks masculine, firm but at the same time spacious.

Typical industrial kitchen pendant lighting and chair styles contribute to this particular kitchen concept. For a clear example, just look at the lamps in this picture. They become one of the prominent industrial kitchen lighting concepts that you can try.

Other aspects refer to the simple chair style, here. The chairs seem to utilize metallic material or applying grey as the painting. Chalkboard walling as seen here is a casual way to fulfill the kitchen’s wall.

The kitchen seems very homey because of the chalkboard and the seating style. The grandma’s recipe shows how the kitchen is filled with family love.

The industrial office kitchen is all about togetherness among all office employees. And we can obtain that goal as seen in this picture. Industrial kitchen elements come from the grey ceiling that consists of the metallic boards.

The kitchen floor also seems industrial as the tone produces a firm and formal look. What attracts us so much is the use of the two long, grey-painted timber tables. The tables get surrounded by colorful timber chairs.

The seating concept reminds us of back to the school canteen. The seating model brings together many workers enjoying lunch while deepening solidarity.

The industrial kitchen is open for beautiful and stylish sub-flavors. You can still put flowers and trendy chair styles as this kitchen reveals. We call this example as appealing modification than typical industrial kitchen style we mostly know of.

The basic industrial aspects appear from the wooden beams, the white brick walling and the vertical window at the back. The coolest things about the kitchen refer to the pendant lamps. The lighting seems adorable and trendy.

To keep the kitchen spacious, there is the sleek chair style that adds a fashionable feature for the whole kitchen.

Grey flavor and stainless steel metal are all over this kitchen. Undeniably, the two aspects carry super strong industrial kitchen tones, here. The kitchen chooses to combine the close cupboard and the open shelving for taking up kitchen utensils.

As a variation, the kitchen places the mosaic wallpaper that enlivens the kitchen. The kitchen is full of high-tech kitchen appliances that we believe this makes our labeling very understandable.

Of course, the industrial kitchen fits for your planned outdoor kitchen. This kitchen occupies a large area. That leads to the use of the simple cabinetry design in large format. The industrial factors come from rough backsplash.

The backsplash utilizes the harsh square tiles that we often see on the floor. On the other hand, the kitchen chooses the square and rectangular tiles that look rough and traditional. That becomes another industrial kitchen tone, as well.

Our last idea looks unique because it brings along other kitchen sub-styles. The industrial kitchen aspect appears from the rough grey painting of the kitchen wall. Another aspect is the retro kitchen as seen from the bulky refrigerator.

The kitchen hangs the beautiful, colorful painting. The ceiling of the kitchen is full of artsy lamps that take form in the two styles. We admire that this narrow kitchen contains rich sub-elements within the space. 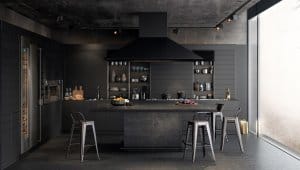 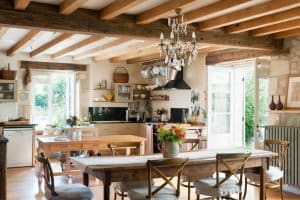 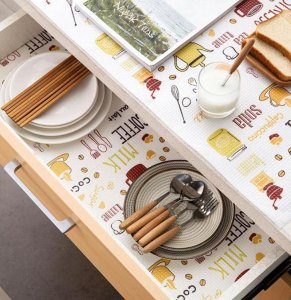 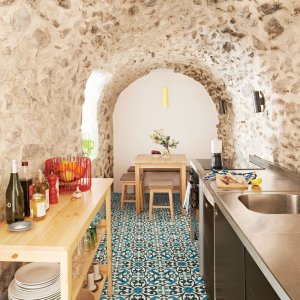 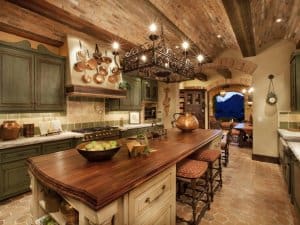