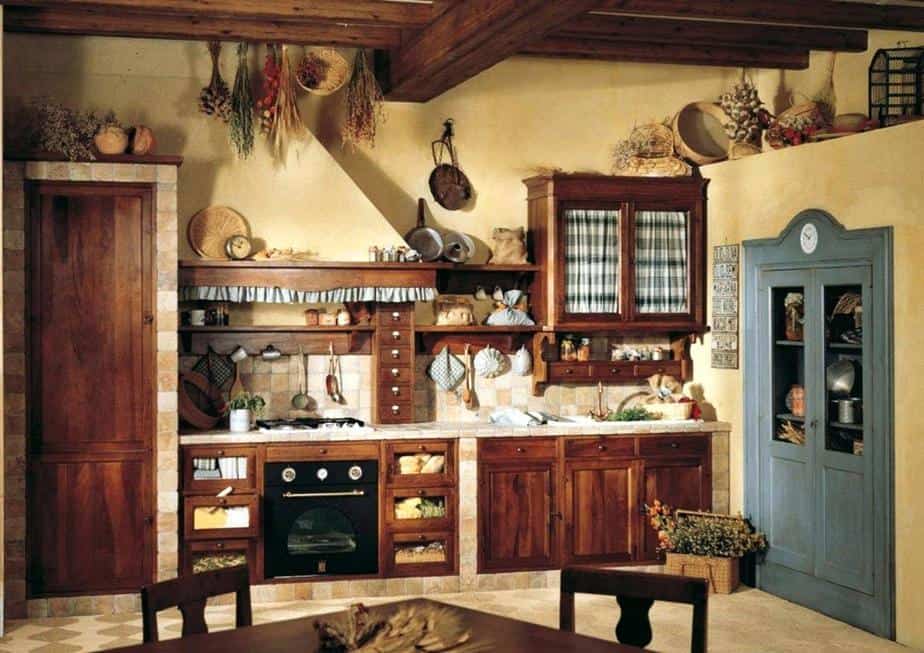 PRIMITIVE KITCHEN IDEAS – What do you think each time you hear the word “primitive”? Old-fashioned, traditional and antique are three features that are mostly tied to this particular kitchen style.

Does it look like our grandmother’s kitchen in a remote village? This is our ideal primitive kitchen. From the first example, we can learn plenty of positive characteristics of the kitchen style.

We can easily capture a humble feature from this example thanks to the usage of wood. From the wooden beams to the flooring, this kitchen is fulfilled with the natural material. That creates this spot into a warm spot.

In addition, the kitchen utilizes simple cabinetry. The best thing from the kitchen refers to the food ingredients that are hanged beneath the ceiling like this.

Looking at the second example brings us back to the old kitchen centuries ago. For furnishing, the kitchen chooses old and antique timber. Like typical classic kitchen cabinetry, this kitchen chooses the open shelving and simple, close cupboards.

The most peculiar thing from the kitchen refers to the scale and the basket that all look very old. You can spot on the old cooking utensils that fulfill the open shelving. There is the chandelier lighting that provides beauty for the kitchen.

Other vintage aspects appear from the door and the chair of the eating-in spot.

Our third example looks beautiful and modern compared to the previous ones. All of them seem primitive but this kitchen looks refreshed with the cabinetry design and the gas stove.

The pretty things from the kitchen appear from the nice wall beneath the plate section storage. We can’t deny, too, that the chandelier lighting seems lavish and super chic. The most unique thing from the kitchen comes from the timber buckets.

They provide the iconic classic kitchen style. And look at the large, clay tiles that cover the kitchen’s floor for they look natural and classic.

We believe that this kitchen is actually part of a modern kitchen. We can ensure that from the large refrigerator and the sink unit, among others. From this example, we can learn that placing reclaimed furnishing is a good way to realize the primitive kitchen.

You can catch them from the “GROCERIES” board name and the desk lamp.

This kitchen seems traditional with no electricity lamp. Instead, it chooses the glass lamp that sits on top of the table. That what leads to concluding this cabin primitive kitchen embraces total silence from the wired world.

Limited kitchen utensils are seen in this picture. You can hopefully enjoy minimalist and peaceful days off when spending time in this cabin.

Besides all wood, this kitchen practices a white-painted ceiling with the wooden beams for producing comfort. We admire how this kitchen looks charming because of the soft curves that somehow makes the cabinetry so pretty.

Other alluring aspects from the kitchen appear from the large lamp and the wooden chairs.

What we mean by the exclusive primitive kitchen is actually about pricey and finest furnishing of the kitchen. Despite the old look, the cabinetry seems expensive. We call this point as a premium example of a primitive kitchen.

Besides the luxurious look, this kitchen prioritizes good ventilation. As you can see, the kitchen has vertical, large windows that we often find in the old kitchen in the past. The kitchen’s ceiling seems high that further ensures good air circulation in the kitchen.

The trendy lamps and the cute, stylish chairs become the decorations for space. What a primitive but fashionable kitchen.

The particular brown shade colors the whole cabinetry. This can be an alternative for a mostly wooden kitchen like this. Like typical primitive kitchen’s, there are large windows for ensuring natural light and air making their ways into the kitchen.

Of course, the cabinetry is not a modern or minimalist storage one. This cabinetry utilizes the ancient, reclaimed storage. You can even tell the storage contains the rusty aspects.

The last suggestion sets itself apart from the previous examples. This time around, the primitive kitchen style mostly comes from the decorations. You can obtain that flavor from the items that sit on top of the wooden board above the sink unit.

We adore vintage decorations that fulfill the kitchen island. The overall kitchen look seems delightful and pretty despite the limited space it occupies. For the kitchen’s countertop, the timber seems light and classic.

After reading the list, do you still think primitive kitchen style is all about outdated overall kitchen appearance?